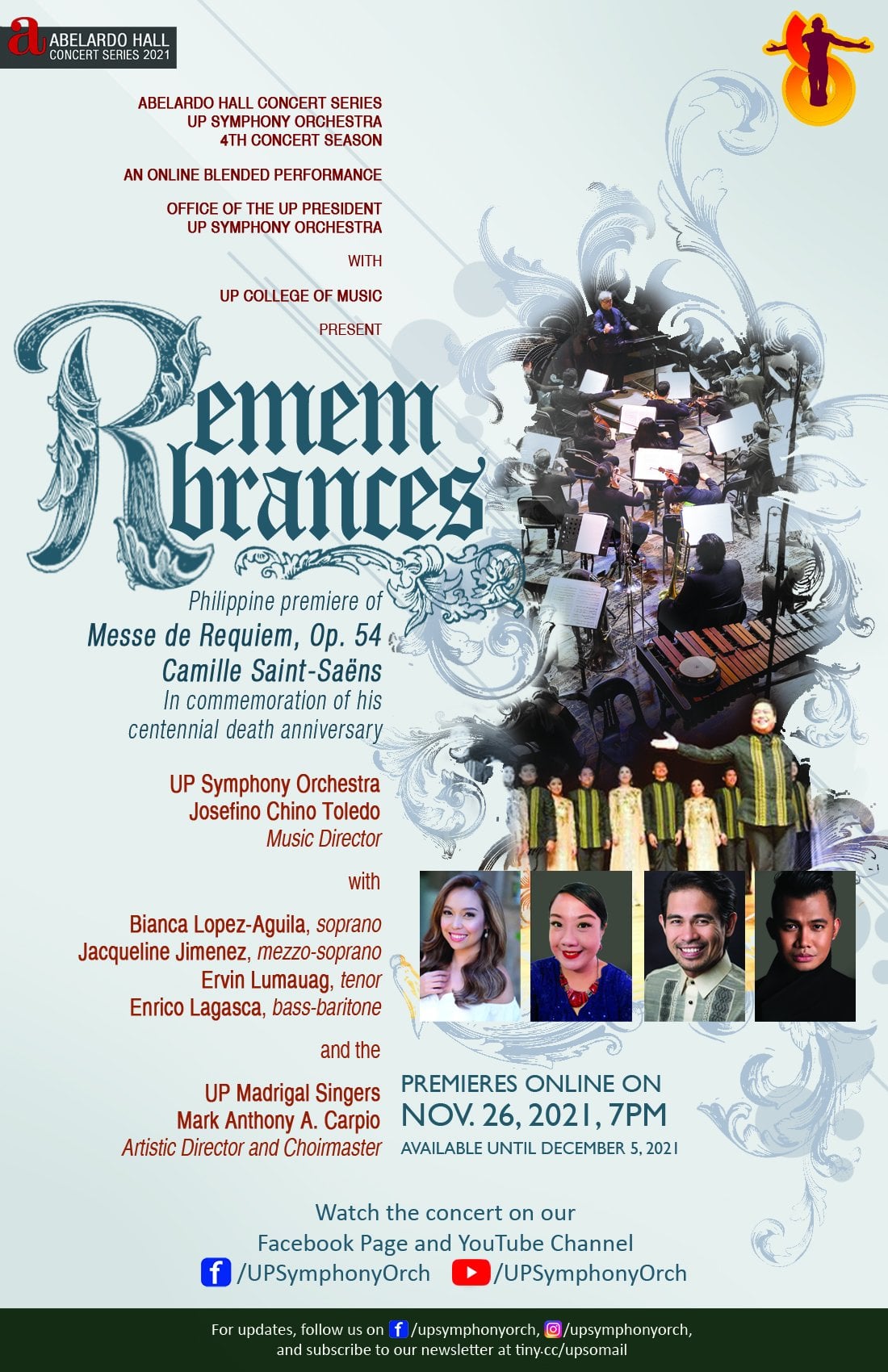 In honor and in memory of all those who have passed especially during this pandemic, the UP Symphony Orchestra and the UP Madrigal Singers come together on November 26, 2021 to perform the Philippine premiere of the monumental Camille Saint-Saëns’ Messe de Requiem, Op. 54. They will be joined by soprano Bianca Lopez-Aguila, mezzo-soprano Jacqueline Jimenez, tenor Ervin Lumauag, and bass-baritone Enrico Lagasca in offering this mass for the dead.

Saint-Saëns composed the Requiem in memory of his dear friend and patron, Albert Libon in 1878. This performance of the UP Symphony Orchestra and the Philippine Madrigal singers is relevant not only as the first performance in the Philippines but also for marking the centennial death anniversary of the composer this year.

Recognized by the UNESCO as Artists for Peace for “putting their fame and influence to promote cultural diversity, intercultural dialogue and a culture of peace,” the University of the Philippines Madrigal Singers is one of the most awarded choral groups in the world, having won all the top prizes in most of the world’s prestigious choral competitions, including the Grand Prix in the 2016 Concurso Internazionale di Guido d’ Arezzo, Arezzo, Italy. They hold the distinction of being the first choir in the world to win the prestigious European Grand Prix for Choral Singing twice (1997 and 2007) and the first Asian choir to be accorded the BrandLaureate Premiere Award by the Asia Pacific Brands Foundation (2012).

Founded in 1963, by National Artist for Music Professor Andrea O. Veneracion, the UP Madrigal Singers, now under designated successor Mark Anthony Carpio, demonstrate every day that choral music can be socially relevant and transformational. They have continued to touch hearts and souls of those who come to their performances and carried on various programs to nurture and develop future generations of conductors and choral singers all over the world.

Soloists Lopez-Aguila, Jimenez, Lumauag, and Lagasca once shared a seat in the semi-circle the Madz is known for. As alumni of the choir, they continue sharing their soulful voices as soloists despite their successful individual careers within and outside the Philippines.

Before we bury ourselves in the festivities of the Christmas Season, we remember those who have gone ahead. We celebrate their lives through Saint-Saëns’ music, a mass for those who we continue to hold dear despite their physical absence.

“Remembrances” premieres on November 26, 2021 at 7pm on the orchestra Facebook page and YouTube channel and will be available until December 5, 2021.


You may contact the UP Symphony Orchestra at any of their social media platforms or at info.upsymphonyorchestra@up.edu.ph and the UP Madrigal Singers thru their website www.PhilippineMadrigalSingers.com.